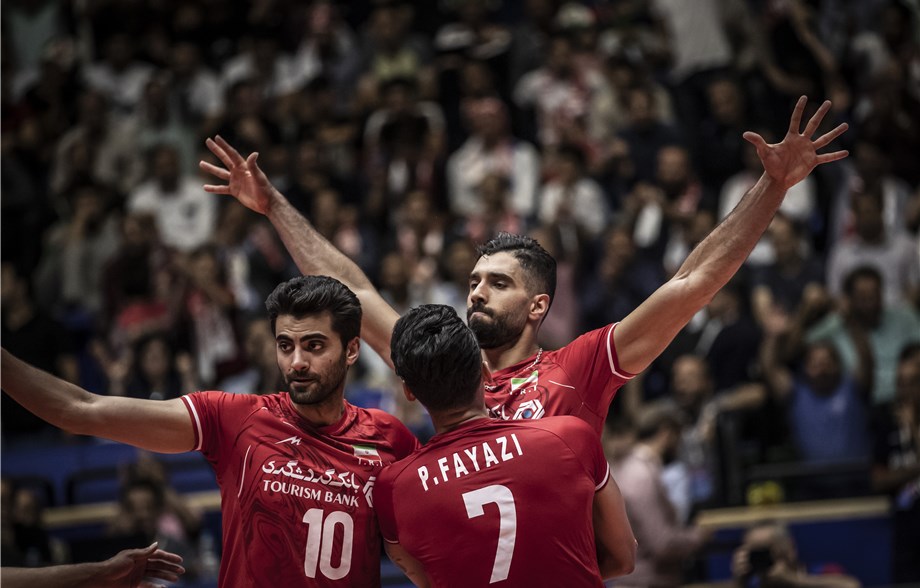 * * * Lausanne, Switzerland, June 15, 2019 – Amir Ghafour’s versatile performance that produced 16 markers powered Iran’s straight-set (25-15, 26-24, 25-16) win in their opening match against Canada in the 2019 FIVB Volleyball Nations League on Friday.
Ghafour recorded 12 kills, two blocks and two service winners to lead Iran to its sixth win this season – one victory shy of their total wins from last season. The 28-year-old Ghafour is the only player on their side to score beyond the century mark, with a total of 107 points.
Purya Fayazi and Seyed Mohammad Mousavi also produced double figures against Canada, scoring 11 and 10 points, respectively. Together with Ghafour, their good performance could factor in against their encounter with the reigning world champions Poland on Saturday.
The Poles, who are coming off a four-set loss against the Russians on Friday, are banking on their team’s winning advantage at world level tournaments against the Iranians. However, in their last two encounters last year, they produced an equal 1-1 record against each other.
Iran won in straight sets at the 2018 VNL, while Poland won in straight sets at the World Championship. In that last encounter, Ghafour scored a match-high 17 points in his team’s defeat.
The first match at Urmia between Russia and Canada is scheduled at 15:30 local time and then the main header between hosts Iran and Poland is scheduled at 18:30.

A win by the Iranians against Poland would put them in a good position in their matchup on Sunday against the Russians, who are the reigning VNL champions. Since losing their first match, Russia have won six consecutive matches at the 2019 VNL.

In other pool matches, Brazil are looking to recover from their five-set loss against Serbia in Gondomar. The Brazilians suffered their first loss in the tournament and will try to get back on the winning track when they meet with China in Pool 9 at 16:00 local time. Portugal will take on Serbia at 19:00.

In Pool 10, Italy are hoping to win their second match in Varna against Australia at 17:00 local time, then Bulgaria will go for their second win at home against Japan at 20:40.

France are also hoping to extend their winning run when they meet Argentina at 20:00 local time in Cannes, but before that, the United States will play Germany at 17:00.

Team Melli will face Poland and Russia on Saturday and Sunday, respectively at the Urmia Ghadir Hall.

The competition is being held between May and July 2019 and the final round will take place in the Credit Union 1 Arena, Chicago, United States.

Earlier on the day, Russia defeated Poland 3-1 in Urmia.

This is the first edition of the World League or the Nations League to have the Final Round hosted in North America.

The 16 teams compete in a round-robin format with every core team hosting a pool at least once. The teams are divided into four pools of four teams at each week and compete five weeks long, for 120 matches. The top five teams after the preliminary round join the hosts of the final round to compete in the final round.
--- ---...

english.farsnews.com 08/09/2014 News
TEHRAN (FNA)- Three Iranian volleyball athletes were selected as the best blocker, the best setter, the best receiver at the end of the first round of...View Details»