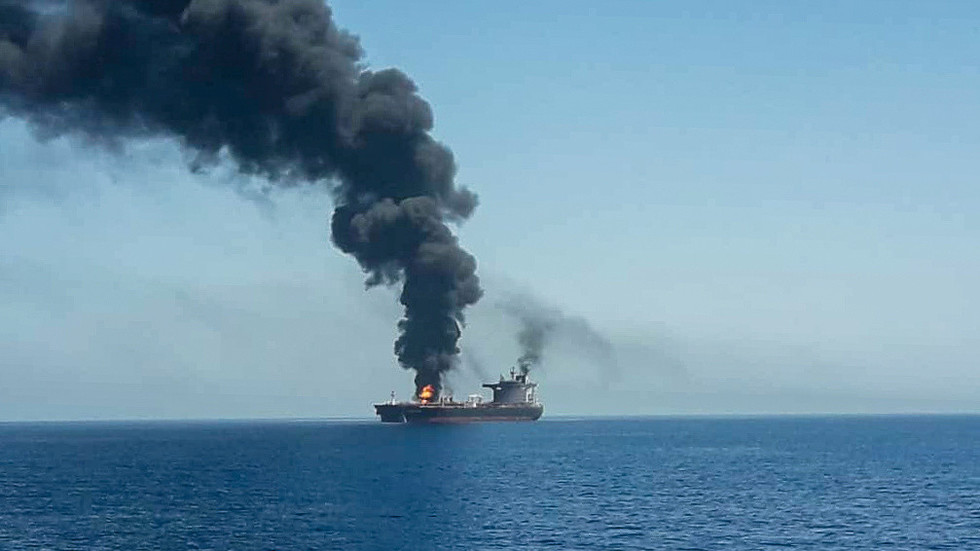 The US campaign for a war against Iraq in 2003 serves as a cautionary tale against saber-rattling and finger-pointing amid current tensions in the Persian Gulf, the Kremlin’s spokesperson has said.
An oil tanker after it was attacked in the Gulf of Oman. June 13, 2019. © ISNA / Reuters 2808454

* * * “We didn’t forget the vials with white powder. We remember and, therefore, have learnt to show restraint in our assessments,” Dmitry Peskov said on a TV show aired on ‘Rossiya 1’ channel on Sunday.
He was referring to a famous scene at the UN Security Council in the months leading up to the Iraq War. Attempting to justify the upcoming US invasion of the Middle Eastern country, then-secretary of state, Colin Powell, brandished a vial with white powder meant to illustrate the dangers of anthrax, which the US were accusing Saddam Hussein of stockpiling.
The allegations of Iraq possessing anthrax and other weapons of mass destruction were proven to be untrue, but only after Washington launched an invasion, toppling the government in Baghdad.
Peskov said that this story now serves as a cautionary tale against rushed finger-pointing in ongoing tensions in the Persian Gulf.
Secretary of State Mike Pompeo had earlier blamed Iran for an attack on two foreign oil tankers this week, citing intelligence. The US Navy later released a grainy video allegedly showing the crew of an Iranian patrol boat removing a limpet mine from the hull of one of the ships. Iran has denied any involvement in the incident.
The US claims were supported by some of its allies, like Saudi Arabia and the UK. “We have done our own intelligence assessment and the phrase we used is ‘almost certain’... We don’t believe anyone else could have done this,” British Foreign Minister Jeremy Hunt told BBC on Sunday.
Saudi Crown Prince Mohammed bin Salman put it more bluntly, saying that by “attacking the tankers,” Iran had targeted “security and stability in the region.”
The Kremlin’s spokesperson, on the other hand, stated that no sufficient proof has yet been presented to blame anyone. Jumping to conclusions and making hasty decisions could lead to dire consequences, he said.
Appealing to some kind of classified data in this case is absurd. Incidents like that can really shake up the foundations of the world economy, so any unfounded accusations shouldn’t be considered.
Some other nations, as well as politicians, have also expressed skepticism towards the US’ case against Iran. German Foreign Minister Heiko Maas said that the video, which was shared by Washington, was “not enough” to make a final judgement about the incident. UK Labour Party leader, Jeremy Corbyn, blasted the US for pinning the blame on Tehran “without credible evidence.”
--- ---
...