Inauguration of Suez Canal By Achaemenid King Dariush The Great

Inauguration of Suez Canal By Achaemenid King Dariush The Great ...
parseed.ir 23/04/497BC History

Remnants of an ancient west–east canal through the ancient Egyptian cities of Bubastis, Pi-Ramesses, and Pithom were discovered by Napoleon Bonaparte and his engineers and cartographers in 1799.
According to the Histories of the Greek historian Herodotus, about 600 BCE, Necho II undertook to dig a west–east canal through the Wadi Tumilat between Bubastis and Heroopolis, and perhaps continued it to the Heroopolite Gulf and the Red Sea. Regardless, Necho is reported as having never completed his project.
Herodotus was told that 120,000 men perished in this undertaking, but this figure is doubtless exaggerated. According to Pliny the Elder, Necho's extension to the canal was about 57 English miles, equal to the total distance between Bubastis and the Great Bitter Lake, allowing for winding through valleys. The length that Herodotus tells, of over 1000 stadia (i.e., over 114 miles (183 km)), must be understood to include the entire distance between the Nile and the Red Sea at that time.

With Necho's death, work was discontinued. Herodotus tells that the reason the project was abandoned was because of a warning received from an oracle that others would benefit from its successful completion. Necho's war with Nebuchadnezzar II most probably prevented the canal's continuation.
Necho's project was completed by Darius I of Persia, who ruled over Ancient Egypt after it had been conquered by his predecessor Cambyses II. It may be that by Darius's time a natural waterway passage which had existed between the Heroopolite Gulf and the Red Sea in the vicinity of the Egyptian town of Shaluf (alt. Chalouf or Shaloof), located just south of the Great Bitter Lake, had become so blocked with silt that Darius needed to clear it out so as to allow navigation once again. According to Herodotus, Darius's canal was wide enough that two triremes could pass each other with oars extended, and required four days to traverse. Darius commemorated his achievement with a number of granite stelae that he set up on the Nile bank, including one near Kabret, and a further one a few miles north of Suez. The Darius Inscriptions read:
Saith King Darius: I am a Persian. Setting out from Persia, I conquered Egypt. I ordered this canal dug from the river called the Nile that flows in Egypt, to the sea that begins in Persia. When the canal had been dug as I ordered, ships went from Egypt through this canal to Persia, even as I intended.
— Darius Inscription
The canal left the Nile at Bubastis. An inscription on a pillar at Pithom records that in 270 or 269 BCE, it was again reopened, by Ptolemy II Philadelphus. In Arsinoe, Ptolemy constructed a navigable lock, with sluices, at the Heroopolite Gulf of the Red Sea, which allowed the passage of vessels but prevented salt water from the Red Sea from mingling with the fresh water in the canal.
Darius the Great's Suez Inscriptions were texts written in Old Persian, Elamite, Babylonian and Egyptian on five monuments erected in Wadi Tumilat, commemorating the opening of the "Canal of the Pharaohs", between the Nile and the Bitter Lakes.
The best preserved of these monuments was a stele of pink granite, which was discovered by Charles de Lesseps, Ferdinand de Lesseps's son, in 1866, 30 kilometers from Suez near Kabret in Egypt. It was erected by Darius the Great, king of the Achaemenid Empire (or Persia), whose reign lasted from 522 BCE to 486 BCE. The monument, also known as the Chalouf stele (alt. Shaluf Stele), records the construction of a forerunner of the modern Suez Canal by the Persians, a canal through Wadi Tumilat, connecting the easternmost, Bubastite, branch of the Nile with Lake Timsah which was connected to the Red Sea by natural waterways. The stated purpose of the canal was the creation of a shipping connection between the Nile and the Red Sea, between Egypt and Persia.
Partial transliteration and translation of the inscription:
Transliteration of the Old Persian text:
xâmanišiya thâtiy Dârayavauš XŠ adam Pârsa amiy hacâ Pâ rsâ Mudrâyam agarbâyam adam niyaštâyam imâm yauviyâ m katanaiy hacâ Pirâva nâma rauta tya Mudrâyaiy danuvatiy ab iy draya tya hacâ Pârsâ aitiy pasâva iyam yauviyâ akaniya avathâ yathâ adam niyaštâyam utâ nâva âyatâ hacâ Mudrâ yâ tara imâm yauviyâm abiy Pârsam avathâ yathâ mâm kâma âha
English translation:
"King Darius says: I am a Persian; setting out from Persia I conquered Egypt. I ordered to dig this canal from the river that is called Nile and flows in Egypt, to the sea that begins in Persia. Therefore, when this canal had been dug as I had ordered, ships went from Egypt through this canal to Persia, as I had intended."
--- ---
... 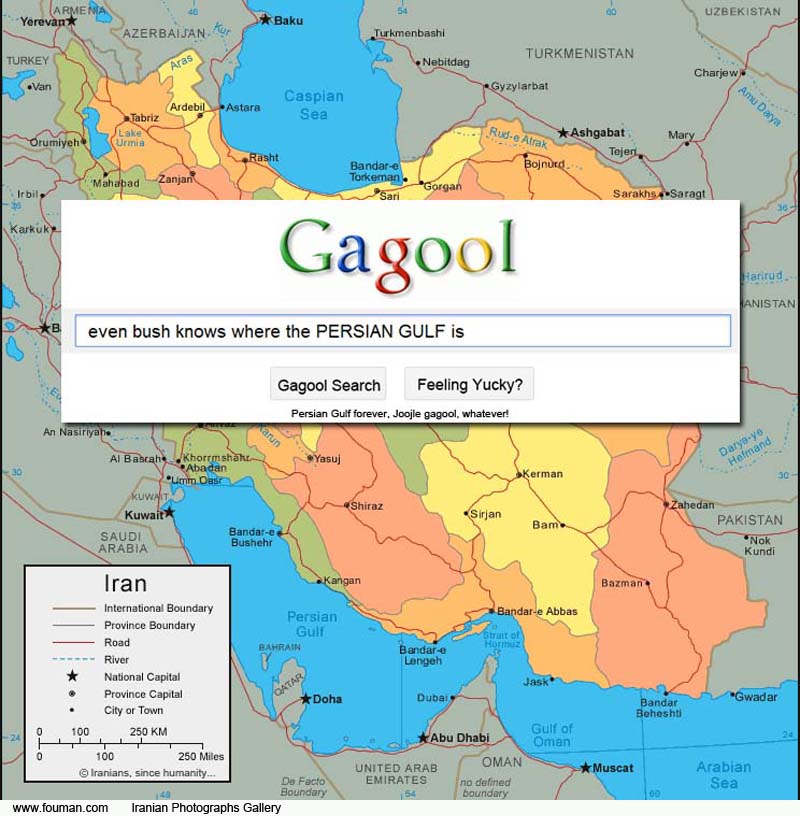 1host2u.com 01/04/2014 History
By Mir Masood Hosseini Tehran – April, 1, 2014 Iranian Ministry for Absurd Affairs announced today that the name of the Persian Gulf will be changed...View Details»

Ancient Persian Inscriptions Link a Babylonian King to the Man Who Bec... Negareh: Scythians meeting with Dariush the Great By Franciszek Smugle...

1host2u.com 26/03/2014 Media
The Scythians were an ancient Iranic people of horse-riding nomadic pastoralists who, throughout classical antiquity, dominated the Pontic-Caspian ste...View Details»