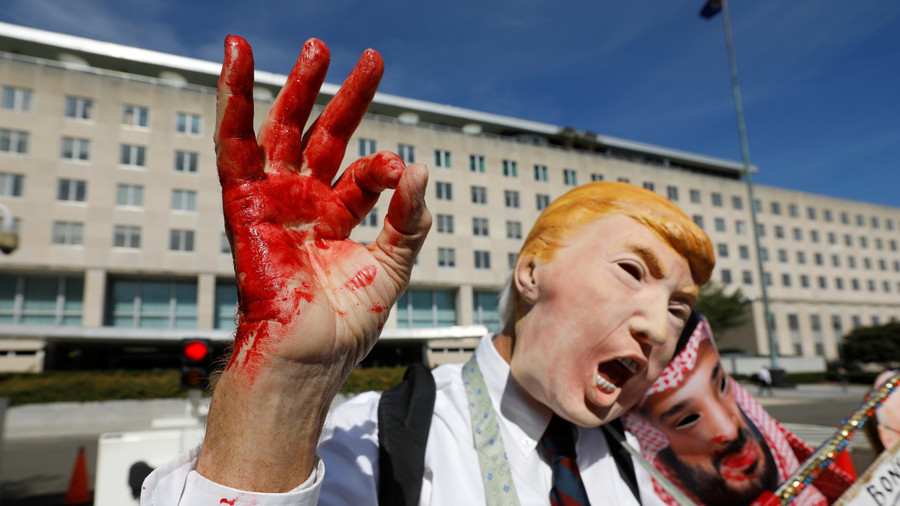 Calling Saudi Arabia a crucial ally against Iran that purchases billions of dollars-worth of US weapons, Donald Trump lamented Khashoggi’s “unacceptable” death but praised Riyadh for making the first arrests in the ongoing probe.
“It is a good first step. It is a big step,” Trump said, admitting, though, that “some questions” do remain and that he will be dealing with Congress on how to proceed to address the issue.“Saudi Arabia has been a great ally but what happened in unacceptable,” Trump emphasized.
“I would prefer if there is going to be some form of sanction, or what we may determine to do if anything,” the president said. “But I would prefer that we don't use as retribution, canceling the $110 billion-worth of work, which means 600,000 jobs.”
“They have been a great ally in the Middle East. We need them as a counter-balance to Iran. So it's not the simplest solution. It's not the simplest situation to be in,” Trump reiterated, expressing hope that “it will get solved, it will get solved.”
Trump said he was going to call Crown Prince Mohammed bin Salman for more details and that Riyadh already promised him a “full report” into what happened to Khashoggi, a journalist who wrote for the Washington Post, after he entered the Saudi consulate in Istanbul on October 2. According to numerous reports citing Turkish officials familiar with the probe, the journalist was ambushed by Saudi agents, cruelly tortured and murdered.
When faced with a threat of potential retributions by the US and other world powers amid the widening outrage over its alleged complicity in Khashoggi's death, Riyadh finally admitted that the journalist lost his life in a “fist-fight” inside the embassy. Amid the ongoing investigation, Saudi authorities also announced the detention of 18 suspects in the case. Furthermore, King Salman fired top spy officials and issued orders to overhaul the General Intelligence Agency, a task he assigned to Crown Prince Mohammed bin Salman.
--- ---
...

Here’s Exactly Who’s Profiting from the War on Yemen...

inthesetimes.com 25/05/2019 Military
And how the U.S. could stop weapon sales if it wanted to. By Alex Kane May 20 | June 2019 Issue Priyanka Motaparthy, a researcher for Human Rights Wat...View Details»

‘Mad Dog’ brags of being anti-Iran in Saudi visit, Tillerson catches u...

msn.com 11/04/2019 News
By Stephen Kalin and Jonathan Landay RIYADH/WASHINGTON (Reuters) - Egypt has pulled out of the U.S. effort to forge an "Arab NATO" with key Arab allie...View Details»