Washington releases video it says shows Iranian soldiers removing unexploded mine from damaged tanker.
Iran has denounced as "ridiculous" and "dangerous" allegations by the United States that Tehran was behind reported attacks on tankers near the Strait of Hormuz.
The two vessels - the Japanese-owned Kokuka Courageous and the Norwegian-owned Front Altair - were damaged on Thursday morning as they were leaving the Gulf of Oman, the second such incident in four weeks that sent Brent crude prices up and heightened tensions in the region.
US officials late on Thursday released a grainy video they said showed a boat crew of Iran's Revolutionary Guard Corps (IRGC) drawing up to Kokuka Courageous, hours after the suspected attacks, and removing an unexploded limpet mine from the hull.
The release of the black-and-white footage came after Secretary of State Mike Pompeo said US intelligence agencies had concluded that Iran was responsible for the attacks, without offering concrete evidence.
On Friday, in a TV interview on Fox News, US President Donald Trump said, "Iran did do it".
"You know they did it because you saw the boat," Trump told the "Fox and Friends" show. "I guess one of the mines didn't explode and it's probably got essentially Iran written all over it."
But Yutaka Katada, owner of the Kokuka Courageous, cast doubt on part of the US account, telling reporters on Friday that the vessel's crew saw a "flying object" before a second blast on the boat.
Calling reports of a mine attack "false", he said: "The crew was saying it was hit by a flying object … To put a bomb at the side of the boat is not something we are considering." 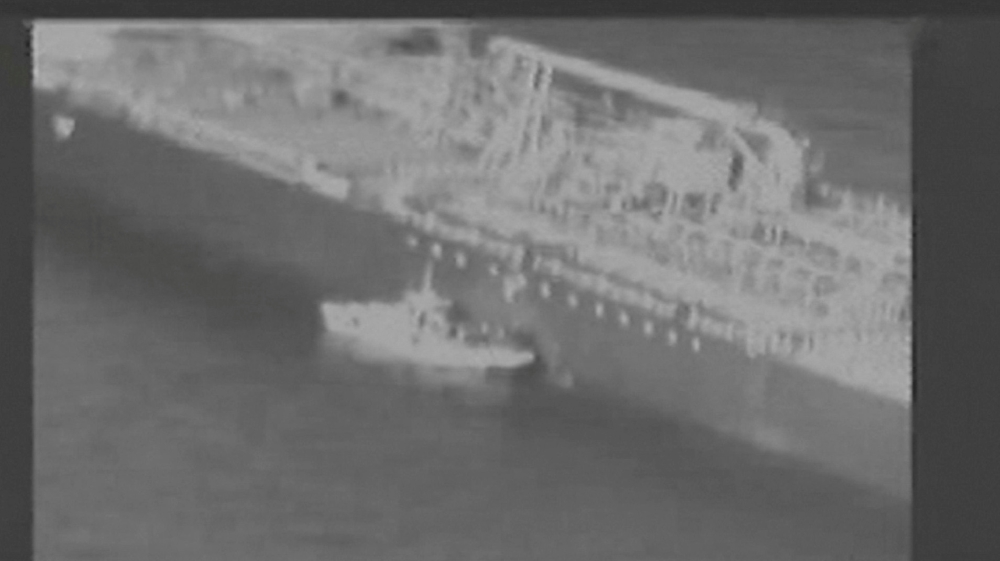 * * * For its part, Iran rejected the accusations as the United Nations, Russia and Qatar called for an international investigation into the reported attacks.
'Dangerous'
Mohammad Javad Zarif, Iran's foreign minister, said the US had "immediately jumped to make allegations against Iran without a shred of factual or circumstantial evidence".
The allegation "only makes it abundantly clear" that the US and its regional allies, Saudi Arabia and the United Arab Emirates, were moving to a "Plan B", Zarif said, which was to "sabotage diplomacy" as Japanese Prime Minister Shinzo Abe visited Iran to defuse escalating US-Iran frictions.
Tensions have ratcheted up in recent weeks after Washington sent warships and troops to the region citing unspecified threats from Tehran.
On May 12, days after Washington announced the military deployment, four oil tankers near the Strait of Hormuz were damaged in what the UAE called "sabotage attacks". The US blamed Iran for last month's incidents, saying Iranian-made limpet mines were used in the attacks. Tehran rejected the claims.
Abbas Mousavi, a spokesman for Iran's foreign ministry, called the latest US accusations "ridiculous, but also very worrying and dangerous", according to the IRNA state news agency.
Blaming Iran for the incidents was "the simplest and the most convenient way" for US officials, he said, adding: "We are responsible for ensuring the security of the Strait and we have rescued the crew of those attacked tankers in the shortest possible time."
The Strait of Hormuz is one of the world's most important sea lanes, as one-third of all oil traded by sea, which accounts for a fifth of all oil traded worldwide, passes through the waterway.
Justin Bronk, a combat technology specialist at the Royal United Services Institute, said the patrol boat shown in the US video was known to be the kind used by the IRGC.
However, "if the attack was the Iranians, this would be a very, very brazen thing to do, to go up and retrieve an unexploded mine [while] under scrutiny from the US destroyer that was nearby," he said.
"On the other hand, you could argue that they were keen to pick up an unexploded mine to avoid it linking back to them. Although, realistically, if this was the Iranians, there will be enough evidence to link back to them even without the unexploded mine." 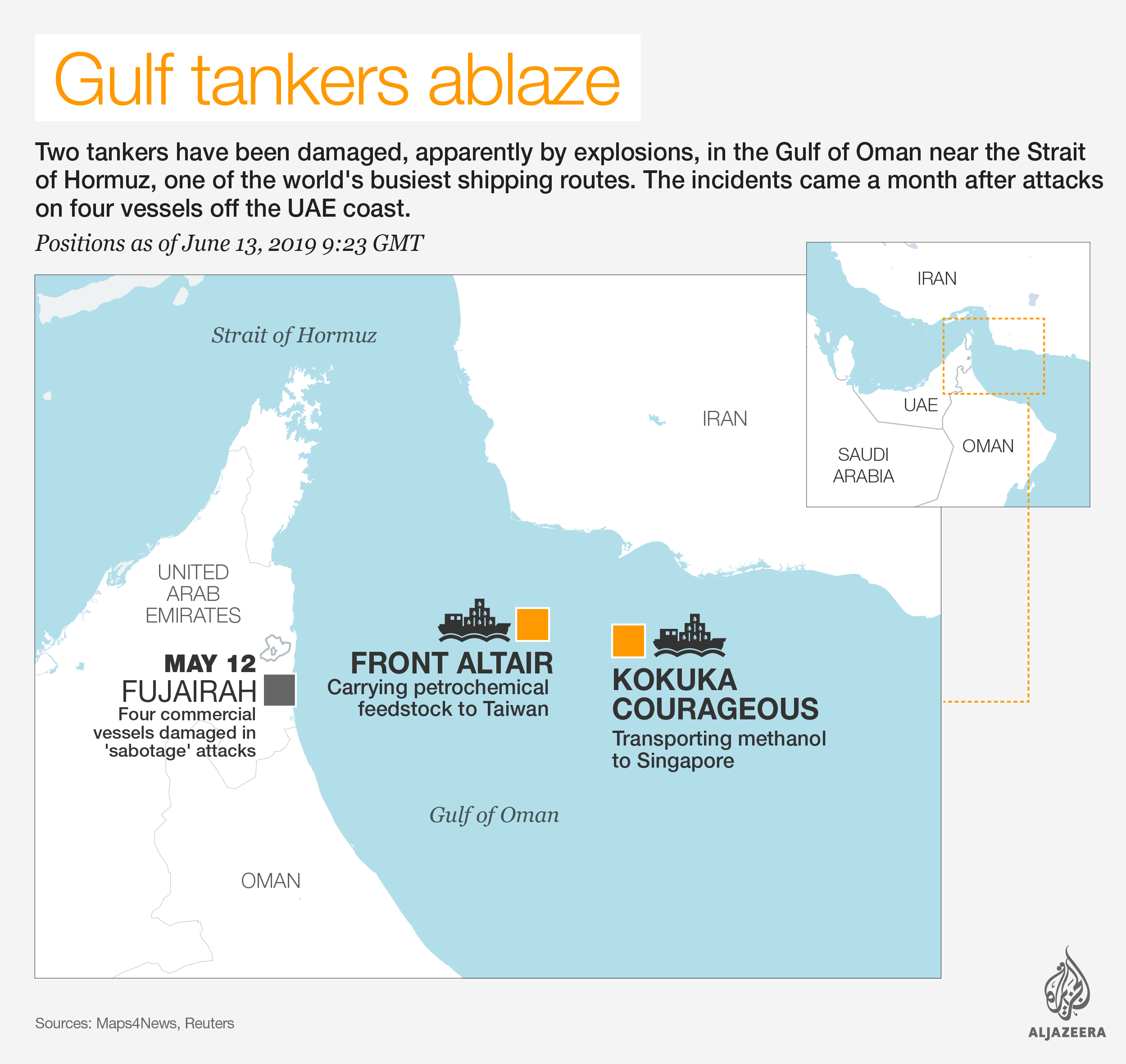 Nuclear deal fallout
UN Secretary-General Antonio Guterres told reporters in New York that the truth of the attacks needed to be established.
"Obviously that can only be done if there is an independent entity that verifies those facts," he said on Friday. However, he said he did not have the authority to establish such an inquiry, adding that this was the purview of the Security Council.
Russia's foreign ministry issued a statement accusing the US of stoking tensions with its accusations against Iran. Condemning Washington's "Iranophobic" stance, it warned against blaming anyone until the completion of a "thorough and unbiased international probe".
Germany also called for an inquiry, while China appealed for restraint. The United Kingdom backed the US stance that Iran was responsible for the reported attacks.
The heightened frictions in the Gulf come as the US reinstated and tightened punishing sanctions on Tehran, a year after it exited an international pact that offered Tehran sanctions relief in exchange for curbs on its nuclear programme.
Iran's President Hassan Rouhani, speaking at an international forum in Kyrgyzstan on Friday, assailed the US as a "serious threat" to global stability. He made no mention of the tankers but lashed out at Washington for pulling out of the 2015 Iran nuclear deal.
"For the past two years, the US government has used its economic, financial and military power through an aggressive approach to disrupt all international structures and regulations, which has turned him into a serious threat for the stability of the region and the world," he said.
Al Jazeera's Dorsa Jabbari, reporting from Tehran, said the latest US moves were aimed at forcing Iran to negotiate a new deal that would also address its ballistic missiles programme as well as support for armed groups in the region.
"The general feeling here is that Thursday's incidents are not something the Iranians would do. It is not in their best interests. There is actually no evidence and this grainy footage from the US is not substantial enough - it's not clear where this footage came from and who is visible in it," she said.
Meanwhile, Giorgio Cafiero, CEO of Gulf State Analytics, said the latest events highlighted the fact that any disruptions in the strait would also affect the economies of Iran's regional foes, Saudi Arabia and UAE.
"Saudi Arabia and the UAE, where these two tankers were coming from, have supported Trump's maximum pressure campaign [against Iran] and some could see how it could make sense for Iran to gain from situations like this, whereby the pro-Trump countries in the Gulf face new problems as blowback for supporting the White House," he said from Washington, DC.