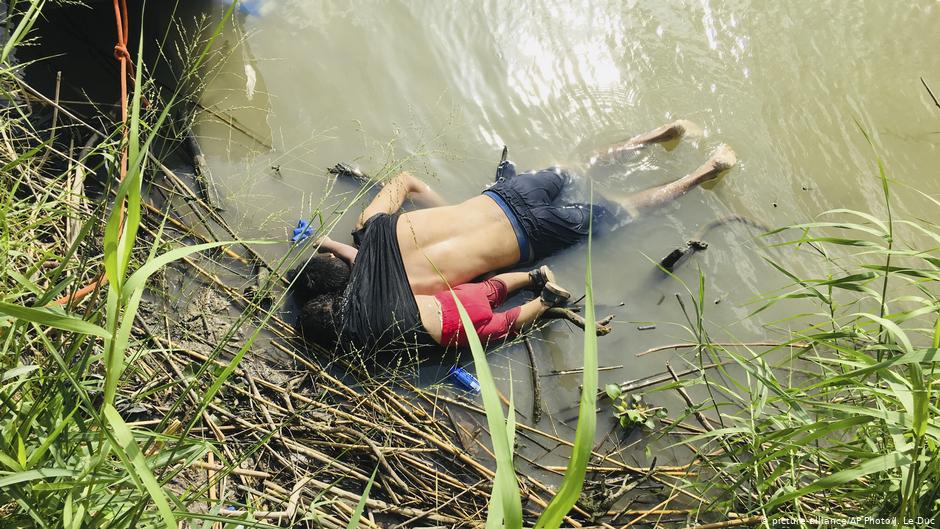 The shocking photo of a father and his toddler daughter, lifeless on the banks of the Rio Grande, was a tragic reminder of the risks that Central American migrants face on their journey to reach the US.
A photo of a drowned father and his two-year-old daughter at the US-Mexican border surfaced on Wednesday. The two died attempting to cross the Rio Grande that divides both countries.
The image, which showed the girl still holding on to her father, lying face-down in the water, was taken by journalist Julia Le Duc and published by Mexican newspaper La Jornada, and it has served to highlight the high risk migrants face on the perilous journey to the US.
Authorities found the bodies of 25-year-old Oscar Martinez Ramirez and his daughter Valeria on Monday, after a 12-hour search. The mother, Tania Vanessa Avalos, who attempted to cross the river too and survived, recounted the tragic story to authorities and media outlets.
La Jornada reported that the family had been in Mexico for two months on a humanitarian visa they obtained at the Guatemalan border. On Sunday, they went to a point of entry to request asylum on the Mexican city of Matamoros, which borders the US city of Brownsville, on the easternmost part of the border.
As the Mexican border office was closed on Sundays, the family then set out on foot along the river, until they reached a point where they tried to cross. Frustration with the inability to process his family's case appears to be what motivated the father to attempt the dangerous crossing.
Martinez Ramirez swam to the US side of the river bank and left his daughter there, to head back to the Mexican side and help his wife cross. But the child jumped into the water as he was on his way.
The father rushed back, managing to grab his daughter and hold on to her, but a strong current swept them away. * * * 'The American dream'
Rosa Ramirez, the mother of the 25-year-old father of one, told the Salvadoran daily El Diario de Hoy that she begged the family not to leave, but could not get them to "give up their hopes of the American dream."
"He put her in his shirt and I imagine he told himself: 'I've come this far' and decided to go with her," the mother and grandmother told AP of her son's final moments.
Her daughter Wendy told El Diario de Hoy that her brother had grown anxious about the asylum case. "They said they were scared of how the situation of migrants was unfolding, under Trump's pressure. That is why they decided to cross," she said, adding that their original intention was to hand themselves over to US immigration authorities.
Just days before, US President Donald Trump had announced a plan of mass deportations, which he halted for two weeks, while he negotiated with Democrats the future of asylum policies. Since he was elected, Trump has focused on deterring migrant crossings, increasing deportations and generally lowering migration levels in the US.
The White House has not commented on the specific case of the Salvadoran family, but on Wednesday, Trump blamed Democrats for wanting "open borders" and said that migrants were flocking to the US because of its good economy.
El Salvador mourns
President Nayib Bukele of El Salvador expressed sorrow for the deaths and began procedures for repatriating the bodies. "Someday we will finish building a country where migrating will be an option, not an obligation," Bukele said in a statement.
He acknowledged that poverty, a lack of opportunities, inequality and the desire to reunite with family, were factors driving many Salvadorans north.
In a press conference, Foreign Minister Alexandra Hill called on local media outlets to do more to highlight the risks of emigrating. "I implore you to not expose your children and yourselves to this risk," Hill said, in an appeal to her fellow citizens. Rosa Ramirez holds a photo of her son Oscar, his wife Tania and their daughter Valeria

* * * "We ask president Donald Trump to let president Nayib Bukele show that migration from this country will stop, but what has been going on for 20 years cannot be stopped in just two weeks," she warned, adding that her country was working closely with the US Congress and with Mexico's government to solve the crisis.
Mexico's president Andres Manuel Lopez Obrador lamented the death of Ramirez and his daughter during a daily press briefing on Monday, according to La Jornada.
But he cautioned that while authorities could legally stop migrants who seek to cross, he added that it was "not a legal issue."
"We have to deter the migrant flow, but respecting human rights, focusing on the root causes," Lopez Obrador said.
Deadly border crossing
Much of the US-Mexico border is covered by desert and the Rio Grande. Many migrants attempt to cross the river, which is said to cover roughly 1,000 miles (1,600 kilometers) of the 1,933-mile border. While it appears calm, the Rio Grande is a fast-moving river and through it flow dangerous currents.
According to the US Customs and Border Protection (CBP), a total of 283 migrant-crossing deaths were recorded at the border in 2018, but these figures may provide an incomplete picture.
Read more: Deal or no deal, US needs Mexicans
The UN International Organization for Migration's (IOM) Missing Migrants project, which focuses on tracking migrant deaths around the globe, told DW that they recorded 444 deaths at the US-Mexico border in 2018.
"CBP only counts deaths that occur on the US side of the border and where one of their officers is involved in documenting," Kate Dearden, an analyst who works on the Missing Migrants Project said.
She highlighted that Missing Migrants's data incorporated deaths ont he Mexican side and those tracked by various NGOs on the ground.
Regarding the Salvadoran family, Dearden said the little girl's death is now the 13th case of a child dying at the US border in 2019. The organization has already recorded 73 children who have died during migration worldwide this year, as part of an upcoming report on the issue called “Fatal Journeys" that will be released this Friday.
While the factors driving the death toll of migrants varies significantly, Missing Migrants Project pointed to research from the mid-2000s in Arizona that indicated that more restrictive surveillance at the border can be a factor because it tends to push migrants to seek riskier ways to enter.