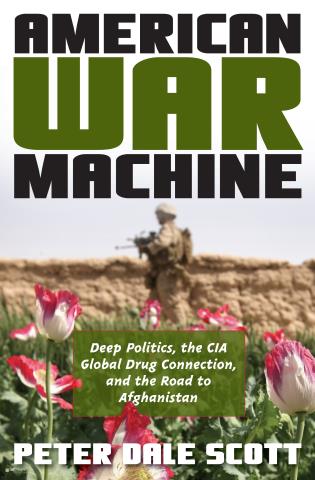 Today, rising consumer prices such in food and energy sectors that affect every other items have one cause: the Military Industrial Media Complex. Everything else is hoax. Lets look at the figures of the arms race and understand what's going on:
The United States — $778 billion
China — $252 billion
India — $72.9 billion
Russia — $61.7 billion
United Kingdom — $59.2 billion
Saudi Arabia — $57.5 billion [estimated]
Germany — $52.8 billion
France — $52.7 billion
Japan — $49.1 billion
South Korea — $45.7 billion
These incredible figures depict the fact that a handful of lunatics are hording resources to produce weapons of death rather than expenditure on improving life on earth.
The money comes from people's pocket. That's why a revolution against the current corrupt world order is necessary.
American War Machine
Deep Politics, the CIA Global Drug Connection, and the Road to Afghanistan
Peter Dale Scott
This provocative, thoroughly researched book explores the covert aspects of U.S. foreign policy. Prominent political analyst Peter Dale Scott marshals compelling evidence to expose the extensive growth of sanctioned but illicit violence in politics and state affairs, especially when related to America's long-standing involvement with the global drug traffic. Beginning with Thailand in the 1950s, Americans have become inured to the CIA's alliances with drug traffickers (and their bankers) to install and sustain right-wing governments. The pattern has repeated itself in Laos, Vietnam, Italy, Mexico, Thailand, Nigeria, Venezuela, Colombia, Peru, Chile, Panama, Honduras, Turkey, Pakistan, and now Afghanistan—to name only those countries dealt with in this book. Scott shows that the relationship of U.S. intelligence operators and agencies to the global drug traffic, and to other international criminal networks, deserves greater attention in the debate over the U.S. presence in Afghanistan. To date, America's government and policies have done more to foster than to curtail the drug trade. The so-called war on terror, and in particular the war in Afghanistan, constitutes only the latest chapter in this disturbing story.

US Has Killed More Than 20 Million People in 37 “Victim Nations” Since...

1host2u.com 03/12/2003 History
Operation Red Dawn was an American military operation conducted on 13 December 2003 in the town of ad-Dawr, Iraq, near Tikrit, that led to the capture...View Details»